The Common Monomyth and Originality 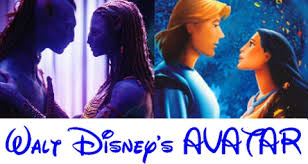 Originality is hard to come by. If you compare works of art such as Harry Potter and Star Trek, you will see a similarity known as a monomyth. “A basic pattern that its proponents argue is found in many narratives from around the world.” (1) Joseph Campell coined this term when he noticed a pattern in several storylines where the hero will be uprooted from his normal world and placed in an alternative one, where he or she will then face several tribulations in which the story will unfold. Most of these monomyth narratives unfold in such a particular and similar order, that Campell created 17 stages that predictably occur within these plots. One specific example of a monomyth is the recent animated film Avatar. Not only does Avatar precisely fall under this category but it is impeccably similar to the 1995 film Pocahontas.

The 1995 film Pocahontas, produced by Walt Disney Pictures, is a tale of British settlers sailing to the “New World” in search of gold. One settler, John Smith, begins to fall in love with a local named Pocahontas. Pocahontas has an arranged marriage by her father that she has no interest in and she begins to fall in love with John Smith. Their love affair creates several wars and fights between the two groups, and ultimately Smith is killed by heroically protecting Pocahontasʼ Chief Powhatan.

Fourteen years after Pocahontasʼ release, the film Avatar was created. James Cameron, the writer and director of the film, created a plot that takes place in the year 2154, where human resources have been greatly depleted. A crew of workers are sent to this world named Pandora in search of a valuable mineral called unobtanium. The name of this mineral symbolizes and foreshadows the experience they will have with it; they soon learn it is virtually unobtainable. Once there, a character named Jake Sully uses an “avatar” to blend in with the natives of this world. Eventually he falls in love with a native and their love affair creates riots within her community. Sully eventually earns the trust of the natives and helps her community fight against the humans and send them back to Earth.

It would be particularly difficult to argue that Avatar is not an entirely unique film, especially with its amazing design of characters and use of modern technology. Avatar was truly groundbreaking when it came to design and the overall imagination within the set of the film. The film had several components of unique creativity; the workers of the film had to create an entirely new language for the natives to speak, and developed an entirely unique, fictional universe. This film was so entrenched with technology that it had previously been delayed in order to vividly produce the vision that Cameron had. (2) However, when you juxtapose Avatarʼs plot to that of Pocahontas, it is impossible not to see the striking resemblance between the two, and the common monomyth structure they each share. As truly unique as the visual aspect and production as the film was, it is far too similar to Pocahontas to be considered an entirely “original” film.

The one common factor that both of these share is the monomyth structure they both follow from step 1 entirely through step 17. The most interesting, and strangely unique, step they both posses is the third step, Supernatural Aid. “Once the hero has committed to the quest, consciously or unconsciously, his guide and magical helper appears, or becomes known. More often than not, this supernatural mentor will present the hero with one or more talismans or artifacts that will aid them later in their quest.” (2) The supernatural aids within these two films are the leading ladies, the women who are from the alternate worlds. However, what is truly intriguing about this step is the shared talisman these women provide to their heroes. Within both Avatar and Pocahontas is a magical, spiritual tree. Avatar’s magical tree is known as “The Tree of Souls” or Vitraya Ramunong; it is a giant willow-like tree that is believed to be the closest tie to Eywa, the Na’vi’s god. (4) In Pocahontas, the tree is known as “Grandmother Willow” and is also a giant willow tree like that in Avatar; she is seen as an ancient and wise figure and provides advise to Pocahontas.

Jake Sully’s crew in Avatar is after one thing and one thing only, Unobtanium; however, the largest deposit of this mineral lies directly beneath the Tree of Souls. As Sully changes his allegiance to that of the Na’vi he begins to do everything in his power to save the giant willow. The night before a battle between the Na’vi and the Americans, Sully connects to the Tree of Souls and asks Eywa to intercede on the behalf of the Na’vi. During the battle the Na’vi are experiencing heavy losses when suddenly all of the wildlife in Pandora join the attack and overwhelm the humans, causing a victory for the Na’vi’s. It is believed that the wildlife participating in the battle was because of the prayer Sully made while connected to the Tree of Souls. Without this spiritual tree, Jake Sully may have been killed or forced to return back to America and the Na’vi people would have lost their beloved willow and much of their land.

In both Avatar and Pocahontas, these magical trees provide much aid to each hero. They both portray wise figures that look over and guide each individual. Usually the supernatural aid within a monomyth is more tangible than the ones in these two stories, like the light saber in Star Wars. However; these supernatural aids provide just as much help and assistance as any other tool could. Using a magical tree as a supernatural aid helps set the monomyth of these two films apart from any other common monomyths.

When the structure of the monomyth is seen between Avatar and Pocahontas, it is clear they both follow the predictable pattern of a classic hero tale. Although the two films are unique in how they use a magical tree as the supernatural aid, it still stands that both the films share this uniqueness, making them not so unique when compared to each other. However, as different as Avatar is from Pocahontas, their storylines are nearly identical. To say that Avatar is truly an original movie would not be an entirely truthful statement; the ideas behind it came from other works in the past. It seems as if cinema films have become nothing more than a mere outer shell of a previous work from the past. Originality within films, if it is not already, is approaching its extinction with every new release of another recreation.

(2) The hero’s journey: Joseph Campbell on his life and work. Edited and with an Introduction by Phil Cousineau. Forward by Stuart L. Brown, Executive Editor. New York: Harper and Row, 1990.